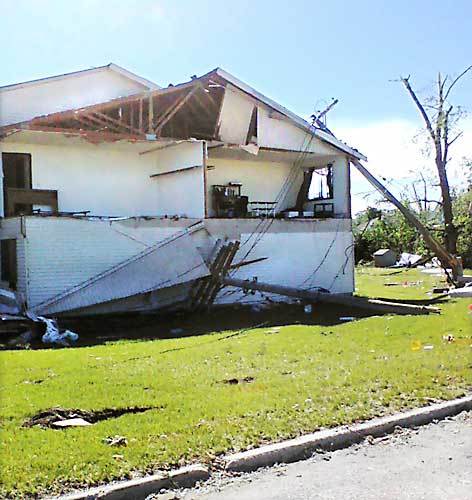 Reported in the Echo Press Newspaper of Alexandria, MN:

• Emergency Management Director Scott McKellep reported he heard from NOAA Sunday afternoon that the tornado (yes, we can officially say that) was an F4 with peak winds in excess of 170 miles per hour. The tornado cut a path 1.1 miles wide and 10 miles long from southwest of Wadena to northeast of town. (The F scale goes from 0-5, with 5 being worst. NOAA says on its website that an F4 is considered “devastating.”)

More are saying the School of Wadena will need to be completely rebuilt. The roof was torn off by one of the Tornados.

Another fact from the Wadena Disaster: “…our community cemetary which is very large and was in the center of the storm. Most of the head stones were tipped over and all the trees are damaged and/or down. The one standing fixture in the cemetary is a statue of Jesus Christ on the cross. It stands unaffected by the storm. …This was an EF4 tornado with winds as high as 170 MPH.”