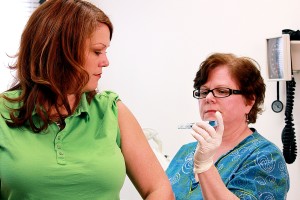 The H1N1 virus outbreak took affect mid-April of 2009. States quickly began comparing symptoms and analyzing information regarding the outbreak. From April 24th, 2009 to July 24th, 2009 states calculated a total of 43,771 confirmed cases of the H1N1 infection. Of those 43,000 about 5,000 people were hospitalized and 302 people died. Different age groups were affected differently. Charts have shown that the age groups of 5 to 25 were the highest to be infected with the virus. The younger age group was where the most hospitalizations occurred. The most deaths occurred in the older ages of 25 to 50.

Finally during the first part of January, 2010 the influenza activities started to decrease in the U.S. Now that the vaccine has been distributed to the nation’s pharmacies research has shown that 20% of America has been vaccinated. In a DEN NEW’S article it was stated by Sheila Baker, the medical director of Health Service, that the best way to protect yourself from the infection is to get immunized. She also stated that the vaccine does not expired until next spring so regional clinics will be offering the vaccine as long as there is a demand.

Students are recommended to stay put if they are infected with the virus to stop the continual spread of the virus. Relief has come and there have been no cases reported in 2010, says Baker. The Health Service continues to monitor things with the flu season coming up.

The decrease of the H1N1 virus has brought relief to many people, but we need to all continue to take care of ourselves when we are sick, and be considerate of others as well. Staying home, and away from others when your sick is the best things you can do. Play a role in stopping the spread of the virus for good.

* Check out this article to see what California has done for eliminating the waiting time to see doctors:

Sorry, the comment form is closed at this time.